I'm working with some graphs, and I'd like to indicate a certain orientation of edges incident on a vertex. With some help I've managed to get this far:

So I have a dashed circular path made with the arc path and a latex stealth arrow tip around a central node. 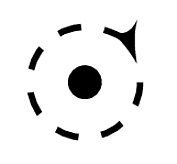 As is clear from the image, the arrow tip is fairly small and not symmetrical about the path it's on. If I'm not mistaken, the asymmetry is because the anchor of the arrow tip is in the very tip of the tip itself, and that is right on the circular path, with the rest of the tip centered on a tangent to the path. The size is a separate issue. So:

By "graphical center" I mean the median of the line segment, along the central axis from the tip, ending where the shape of the arrow tip ends.

with the decorations.markings tikz package. The position is set to 0.999 because at 1 with sharply curved paths the tip sometimes does not appear at all. This takes the arrow tip of a very thick styled path, but are there other arrow tips (perhaps from 3rd party packages) that are noticeably bigger? Or maybe just a way to magnify only the tip?

Edit: Point of making tip larger has been answered by simply drawing a larger shape in the shape of the tip and using it as an arrowhead. Works nicely because of the many adjustable parameters. Thanks to Luigi in the comments.

As a workaround to your first question, you can add a (very) small segment to choose the orientation of the arrow:

you can do only