Before anyone slates me for this, I have checked detexify and texdoc symbols. Indeed, the latter led me to the following phrase (3rd paragraph of Section 3):

Although there have been many requests on comp.text.tex for a contradiction symbol, the ensuing discussion invariably reveals innummerable ways to represent contradiction in a proof … Because of the lack of notational consensus, it is probably better to spell out "Contradiction!" than to use a symbol for this purpose.

Normally, I'd agree with this sage advice. Two things prevent me from doing so:

So, my question: is there a font with this symbol?

The Unicode symbol "⨳" (U+2A33, it is called "SMASH PRODUCT" for some mysterious reasons) you are looking for is available with modern TeX engines (XeTeX, LuaTeX): You'll have to load the unicode-math package and an appropiate OpenType math font such as XITS Math, then you can access it as \smashtimes.

However, using this package will change some other symbols, and this might be no desirable. In this particular case, since the arrow is needed for a commutative diagram I suggest using the tikz-cd package and its mapsto option for arrows: 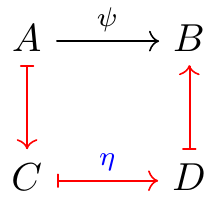 Now that an edit has been made to the original question including the desired commutative diagram, here it is using tikz-cd:

A variation of \tikzmark was used to position some special characters; in particular, the vertical "downmapsto" arrow was obtained with the rotate=270 option applied to a standard \mapsto