I'm currently putting together an installation document for some software at work, and I decided that now was as good a time as any to try to ditch the endless frustration that is Microsoft Word, and try and do it using TeX/XeLaTeX.

I'm trying to keep the same feel of previous documents that my team has produced for similar installations, and this means the document is going to be largely composed sections which are basic "1) Do this", "2) now do this" sections. Not terribly enthralling, but it's sort of the standard. The standard also calls for lots of frequent screen shots of the installer, which I've been trying to include directly into an enumerate list, which is how I approached the "1), 2)" format described above.

The problem with LaTeX's usual approach to including figures means that they can end up some way away from the text which is referencing them. This might be fine in an academic paper, but it might be a bridge too far for my colleagues – so I've been trying to include the graphics directly into the list. My results thus far are not perfect.

Here's a snippet of the XeLaTeX:

As you can see, the 3rd item is shoved a ways out to the left, and I can't work out why. I've scaled the image itself so it doesn't take up the whole page width – so what's going on here?

Or is my whole approach wrong, and there's some dead easy way to do what I'm trying to achieve?

I'd use a minipage: 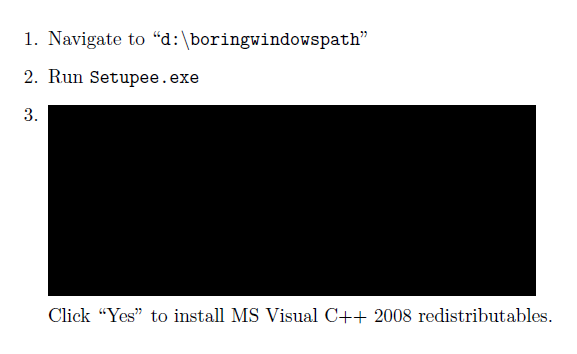 Regarding your caption problem. I don't get any error. I would suspect that your caption.sty is too old.

[Tex/LaTex] the best way to include Matlab graphics

In case the kind of graphics you wish to export is supported by matlab2tikz, there is only one way to go: matlab2tikz.

You get true vector graphics in TikZ, i.e., no fiddling with PostScript, being restricted to latex, no going back and redoing graphics when your font or color scheme changes, small changes in for instance the legend are done in-place, ...