This question already has answers here:
Closed 9 years ago.

How can I move the root higher for this formula ? The fraction in the root is typeset to low:

the result of the document is 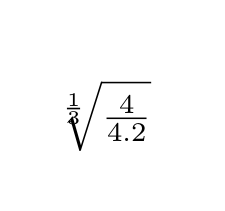 This is comparable to the problem of bundling several key-value arguments (for instance for \includegraphics) in a macro: At the time of executing (the amsmath version of) \sqrt, which is now \OldSqrt, the content of [] is parsed for \leftroot &c. At that time only \DHLindex is found, and later \leftroot is useless.

makes the \leftroot visible and the first attempt goes through.

Dunno whether it does what you want though.

This should also work for attempt 2. Didn't look at attempt 3.

EDIT: What exactly do you want to know about the \DHLhksqrt macro? AFAICS it takes two arguments, builds a root expression from them, which it measures and tries (with debatable success) to decorate with an additional vertical rule.

EDIT2: To make this look a bit better, at least \DHLhksqrt needs to take into account when the root index is moved above the root symbol, otherwise the additional rule is placed too high.

EDIT3: Ok, here's my take at a correction for the displacement problem. The root is formatted twice, so there might be a performance problem.

EDIT4: Unfortunately the root symbol has more whitespace above in bold math mode. Look at

Hence, this has to be considered when placing the "closing rule":

Such a big formula doesn't find its place in line; you could set (maybe locally) \lineskip to 2pt instead of the default 1pt:

(Note the blank line before \endgroup to end the paragraph.)

However, the best way to typeset large formulas is to display them: