Given an arbitrary thin vertical symbol, can I create a new math delimiter from it (and if so, how)?

Edit: Ideally, I would like to be able to create an extensible symbol, either built out an existing normal symbol, or even made from scratch.

Edit 2: I am pretty sure that what I am after is an explanation of how to create a .tfm file for an extensible symbol (which Werner's answer describes the general structure of, but not how to make one).

For example, let's say I wanted to use the \dagger (

where the symbol scaled appropriately. Would there be any distinction between declaring a symmetric delimiter (like \vert), as opposed to one that has inherently different "left" and "right" versions like [ and ]?

Now, even being unaware of the inner workings of TeX, I imagine that there has to be lots of information in the fonts for how a delimiter is to be scaled in different situations, and if I try to make my own delimiter, this information won't be present. Would I need to get deep into FontForge or equivalent to achieve my custom delimiters, or is there an easier way?

All variable-sized delimiters are defined (by the corresponding .tfm file) in terms of up to five segments, as illustrated by Figure 1 on page 102. The top, middle, and bottom segments are of a fixed size. The top-middle and middle-bottom segments (which are constrained to be the same character) are repeated as many times as necessary to achieve the desired height. 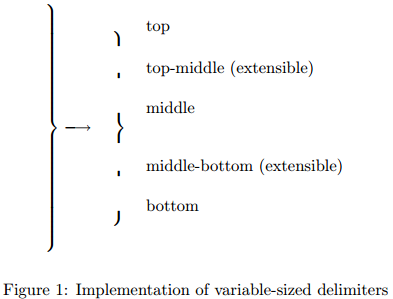 This is merely informative since I am unfamiliar with the procedure of how to create these things in a .tfm file.

Conveniently, scalerel provides \scaleleftright[<max width>]{<left obj>}{<stuff>}{<right obj>} (and a comparable \stretchleftright) for scaling/stretching both <left obj> and <right obj> to the height of <stuff> (constrained, if required and optional, to a width of <max width>). Here's a quick example: 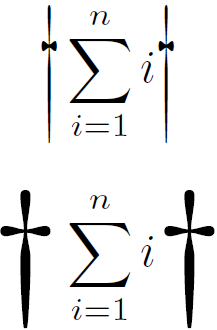 Using \scalerel, one can make one argument match the vertical extent of another argument. The optional argument is a max-width constraint (in this case, I chose 2ex). Here's an example of the same code working on two different \somethinghuge arguments. In this case, I chose \mysymbol as a / sign. 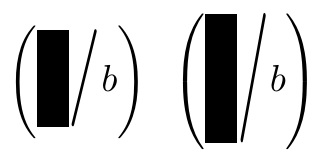 Here's an equivalent syntax that would allow you to avoid typing \somethinghuge twice.