You can list the variable's name by itself on it's own line in your source code, with no semicolon after it. When execution hits that line of code, it will spew the value of the variable out to the command window. No breakpoint needed.

MATLAB: How to Access All Variables of a Function

Use the debugger. There are keyboard shortcuts and programmatic triggers, but I can never remember most of them. There's a Breakpoints menu in the editor and you can also add breakpoints by clicking in the left margin of an open file on the line you want. Then the code will stop there and you can view everything on command line.
There's no need to start trying to chuck all the variables into the base workspace, it is far better to see them in context as they are evolving, and you can step through each line of the code too with the debugger,

MATLAB: How to view parameter values while debugging in App Designer

Here are 3 methods of seeing the values of variables in AppDesigner code.
The first two require using debug mode.
Set up debug mode
Place a break point anywhere within the function that stores the variables you'd like to explore. You can place a break point by clicking on the gray horizontal line along the left edge next to the line numbers.

See values by hovering the mouse over the variable.
After setting the break point, run the app and execute the callback function that contains the line break (example: press the button that calls the callback function). If the line break is in the startup function, just run the app. When execution gets to the break line, execution will pause and you then will have access to all variable values prior to the break point by hovering your mouse over the variable. Press F10 to step through the rest of the code line by line or F5 to finish running the code. 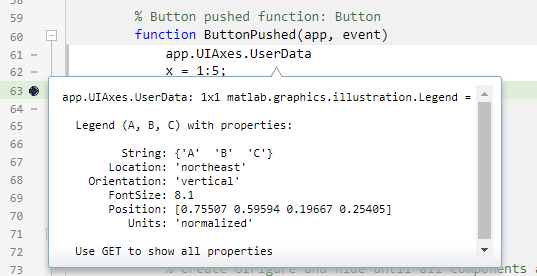