The full details of this problem is given as follows

Construct a circle $\gamma$ with center $O_\gamma$ , and
place two points $A$ and $B$ inside $\gamma$. That does not lie on the edge of the circle. Explain the construction of a point $C$, such that the circle $ABC =\beta$, is internally tangential to $\gamma$.

Now $ABC$ means a circle that passes through the points $A$,$B$ and $C$. I have made a drawing, but I am unable to mathematicaly construct the point $C$.
I already know that for most pairs $A$,$B$ there are two possible choices for $C$. Eg $C_1$ and $C_2$. See the following figure 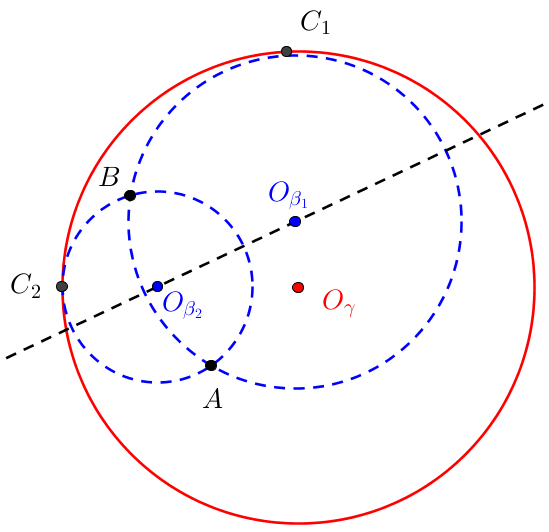 Can anyone show me or help me in finding the placement of $C$, given $A$ and $B$?
The figure is only but a sketch, but I know that the centre of the circle obviously has to lie on the perpendicular bisector of A and B, after that I am clueless.

I gave an answer here, which applies to the general case of finding a circle tangent to three circles, which may have up to 8 solutions. This particular case is a degenerate one where two of the circles are points, and has only 2 solutions. It can be solved by the last step of the general solution I gave, which is to invert at one of the two points, and the desired circle will become a line that must be tangent to a circle and pass through a point, which is easy to construct. Inversion can be easily constructed using compass and straightedge also, and the original desired solutions can likewise be obtained by undoing the inversion.

[Math] Prove any line passes through at least two points

Suppose by contradiction there exists a line $a$ passing through a single point $A$. By axiom 3 there exist two other points $B$ and $C$ and by axiom 1 they belong to a line $r$ parallel to $a$.