I saw some code using \do and I would like to understand it, which to me means finding out what exactly \do does. However, I haven't been able to find it in any sort of reference manual, and it is, quite obviously, ungoogleable. I suspect it's part of basic TeX, but I'm not sure.

What does \do do and when would I use it? Where can I find it in the TeX or LaTeX documentation?

\do is short for \performsomeactiononanargument and is typically redefined depending on the action that needs to be performed.

Therefore, \dospecials performs a bunch of category code changes (\do's). It's just a condensed notation that varies depending on the definition of \do. It's used in other contexts as well for a similar outcome.

etoolbox adopted this usage/notation for "performing some action on an argument" when processing a list of items. For example, when calling

\do is applied to each of the elements sequentially, as in \do{first}, \do{second}, \do{third} and \do{last}. This allows the user to (re)define what the meaning of \do is exactly. Here's an example: 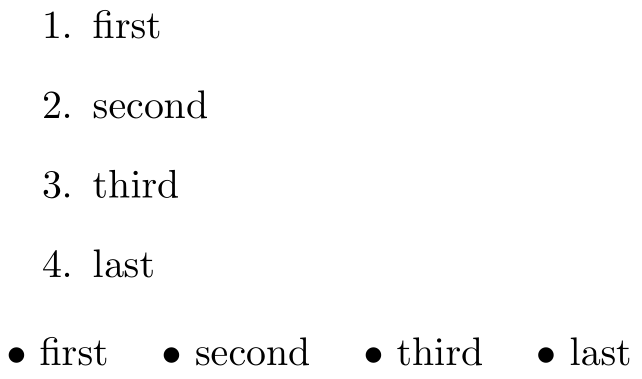 In a very limited context, \do is sometimes used to delimit macro arguments. But in that context it makes literal sense, even though a completely different delimiter could have been used. One example of this is used in \@whilenum or as part of \@for (loop) constructions.