\foreach strips spaces before each list item, and then collects everything up to the next comma (or the list terminating token) before assigning to the relevant variables.

The \foreach problem arises in this case because of the extra space given before the closing brace in the list. Consider the following:

the same effect is found if there is a space before the comma in the first list item:

Note, this effect will also appear if there is a space after the / when using multiple assignment.

By removing these spaces the problems disappear...

Should all spaces be stripped automatically? Automatically stripping spaces at the beginning is trivial (\pgfutil@ifnextchar x{...}{...} is used all over the place in PGF parsing), however it is a relatively expensive operation.

Stripping space after items is hard and would involve character by character parsing, which would be very slow. So, it is easier (and not that inconvenient) just to be careful about spaces.

The other problem is the coordinate specification. Anything that isn't obviously one of the known coordinate systems is assumed to be a node, so 00, 14 are treated as node names. There are many ways to split this specification up, here is one using the .expanded key handler: 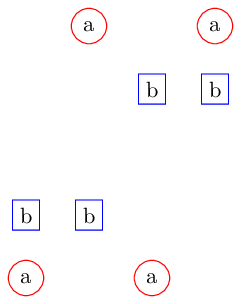