I need to insert a ⚓ into my latex document. (More info about the symbol can be found here)
I have tried to use some other answers here but I have not been successful, including the question Entering Unicode characters in LaTeX, but I couldn't get anything to work. I installed texlive-xetex (Should say I am using ubuntu 10.04) but that didn't like the custom document class I am using.

but they just bombed out without an error (however they were ok for the The vorticity $ω$ is defined as $ω = ∇ × u$. text.

So anything else I can try?

Edit:
Ok so using the right command helped… (I'm relativly new to latex and never heard of xetex before!)
Martigan: I don't know what a MWE is… 🙁

So I have commented out inputenc and it runs / compiles / what ever the proper word is when I run xelatex design.tex but the ⚓ doesn't show up.

I have also just discovered that with \usepackage[utf8x]{inputenc} and using PDFLaTeX, although kile says pdflatex finished with exit code 1 , it does generate a pdf, but instead of the ⚓ it shows [U+2693]. So maybe a font issue???

Finally: I downloaded the font PLK suggested, and after extracting and renaming to unifont I can get xelatex design.tex to find the font, but it says

Thanks for the suggestions so far.

With xetex you can use e.g. dejavu sans (if you get the wrong glyph:make sure that you have only version of dejavu sans). Here too you can use commands/other notation if you don't want to use the symbol in the input:

As suggested in the comments, you could set your font to one that supports Unicode (this solution requires XeLaTeX): 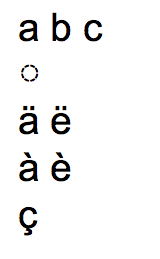 \usepackage[utf8]{inputenc} or \usepackage[utf8x]{inputenc} are needed for TeX engines that do not support UTF-8. Then TeX sees the two bytes C2 and AD and utf8.def or utf8x.def make C2 active to catch AD to print the symbol or execute \- or whatever.

In XeTeX, the bytes C2 AD become the "big" character AD. "Big" character means that character with character codes >= 256 are possible. Then you can make the character active and give it the meaning you requested: