Is there a simple way to typeset byte units like MB, GB, TB in latex in math mode? How do you typeset 1GB for example?

You can use siunitx, which supports both SI and binary prefixes (the latter, via the package option binary-units).

You can even define your own units via \DeclareSIUnit (though that is not necessary here since binary units are already defined in the library). Its main macro, \SI, works in math mode as well as in text:

See page 38 of the siunitx manual for further information.

(Note: I am the author of siunitx, which is the successor to both SIunits and SIstyle.)

Of course, for the more general question about upright Greek letters then the upgreek package is indeed the best plan.

[Tex/LaTex] What package should I use to typeset units

As the author of siunitx I have some idea about the relative strengths of the various alternatives. There are various things that need to be done for units:

Many packages have been written to address one or other aspect of this question. For example, SIunits is good at providing semantic input, whereas SIstyle focusses on correct typesetting but leaves the input to the user. On the other hand, unitsdef sticks to doing only units and does not worry about other aspects.

The aim of the siunitx package is to cover all of the requirements above, and to provide a way that package behaviour can be altered. Thus it uses a series of key-value options that will change how the output is formatted. The options can be applied to the entire document or to an individual piece of input. It also is designed to work in either math or text mode equally well. I have also been very careful to provide up to date advice about the internationally-agreed units in the documentation of siunitx.

As a demo, using the latest release of siunitx the following all show off the package: 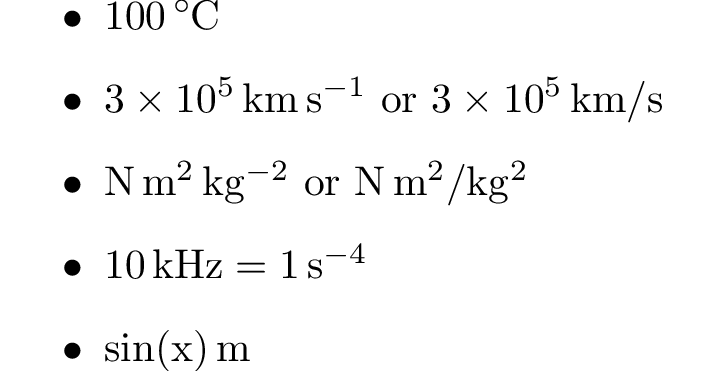 There are a couple of notes to bear in mind if using siunitx. First, it requires e-TeX, which can be an issue with some publishers (even over 10 years after it was finalised!). Secondly, the formatting does take up some time. There are settings to turn things off but it's always the case that working by hand will ultimately be faster. However, the upside of clearer and more flexible input is in my opinion worth it.

One other point is that siunitx is under development, with bug fixes and new features (there is a list for v3.1). In contrast, both SIunits and SIstyle are depreciated: bug fixes only. The units and unitsdef packages have not been updated for many years.