I am busy making a full binary tree of three levels deep.

The code I am having now is (using the trees library):

The problem is that rleft and rright are printed over each other.

Preferably I would like tikz to figure this out by itself, for example if I give a minimum distance between nodes on the same level. Is this possible? (My final nodes will not have text but will be fixed size shapes)

Off course it can be that the solution is: "Don't use 'trees'". In that case, what is the best way to do this?

tikz-qtree is an awesome package for more convenient tree drawing in tikz.

[Tex/LaTex] pstree: How to force a tree node to one side

Putting a nil node is not tricky but rather good maths. Adding manually some space would be ugly.

In pstree you manipulate (ordered) n-ary trees so there is no notion of left or right child node. You can only give a list of child nodes (ordered).

While they are equal as n-ary trees. You need to explicitly encode the skip of the left child node to simulate that in n-ary trees.

The pstree creators proposed you a distinguished \Tn node (nil node) for that purpose.

[Tex/LaTex] How to improve this family tree in TikZ

Some marginal improvements can be achieved by setting the width of all the boxes, as I have done below. However, this particular choice of tree-structure (even for an organization chart is difficult to accomodate on an A3 or A4 paper). Imagine the grandchildren spaced horizontally and we are in trouble if we need to grow the tree one further level.

A better approach is to draw such charts as a directory tree. These type of grids are more economical in terms of horizontal spacing. Here is an example drawn using dirtree. 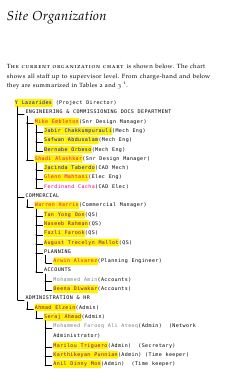 Since the figure mostly consist of text, the using of boxing is extraneous in the example above, however the dirtree can easily be extended to hold tikz nodes rather than text. Another advantage of the above is that in the particular example I have shown in the illustration information was captured in a more intuitive and semantic way,

This also permitted automatic recalculation of totals and the production of a summary table. This is perhaps not a full answer, but you are asking to produce a layout which will break in most circumstances. The proper solution is to produce a dirtree type solution either with dirtree or with TikZ following such a pattern.

The MWE would produce the image above.