Epigraphs are in a box with rounded corners. The boxes have a drop-shadow.

The code for Picture #1, which is relatively simple, resembles:

How do you make a drop-shadow fade out using Tikz, such as Picture #2?

You could use the pgf-blur package, which gives you this:

In fact, it can add a "faded" drop shadow to pretty much anything:

The shadow fading is not continuous, like in the previously accepted answer. It fades in a number of discrete steps, but that number can be changed, see the documentation.

Here's the code for the examples:

Sometimes, PDF renderers will show a dark line in the center of the shadow. This is due to the way they handle anti-aliasing and clipping. To avoid this:

I uploaded the new version 1.3 to CTAN. At the moment the files are available at github.

This version provides a key named shadow. This allows to draw a shadow. The shadow can be manipulated by the new keys shadowsize and shadowcolor

If you use framemethod=tikz it is important to load the TikZ library shadows.

mdframed can do the job but I don't want to load any libraries.

For the methods TikZ and PSTricks I defined a style mdfshadow by tikzset / newpsstyle. For more settings manipulate this key.

Based of the new modification I created the following example: 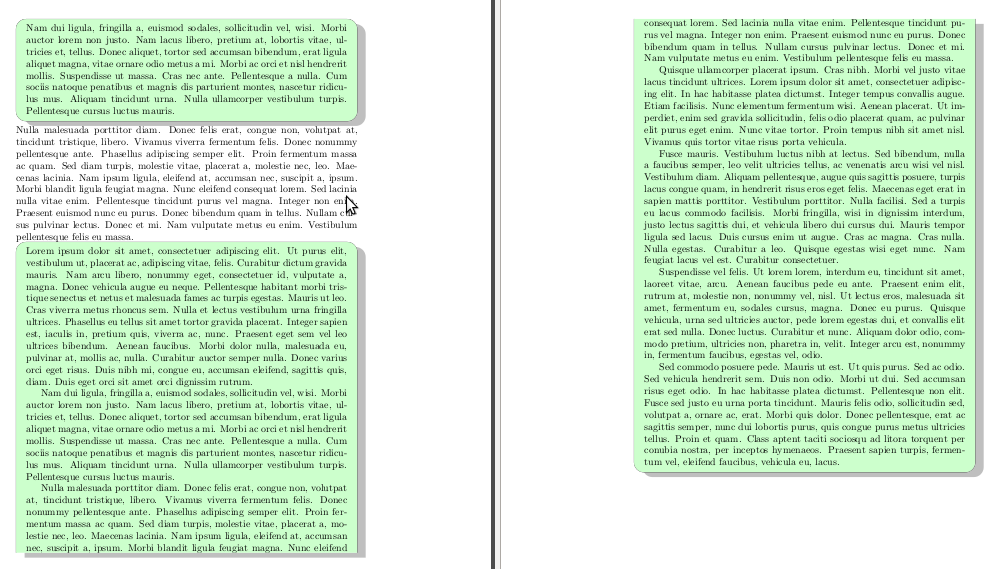 An other example is provided in file mdframed-example-pstricks.pdf which uses pstricks and frametitle:

This led to some additions to the spath library, including better bounding box handling and more extensive path transformations. The latest version is on Launchpad (it should still be regarded as alpha code).

To address the original matter: the problems were caused by bounding boxes. The original spath code made no mention of bounding boxes, so the fading constructed had zero size. Moreover, PGF regards fadings as "black boxes" and doesn't know the internal coordinate system so it doesn't know how to relate the internal and external coordinates. It therefore just places the fading centred at the origin and lets the user sort it out from there (there is a way to fit it to the current path, but that wasn't wanted here either). So what was also needed was a way for the spath library to automatically work out the transformation needed to get the fading in the right place. As fadings are centred, this meant knowing the mid point of the (bounding box of the) path.

That wasn't too hard to add to spath, and was sorely needed so it was no hardship to be essentially asked to put it in.

When I came to experiment with the code to try to produce the desired effect, then I found myself encountering problem after problem - always little niggling things, never anything major. (This was why I asked in the comments about why use a fading: it seemed easier just to draw the paths directly - in theory. However, after experimenting then I decided that actually fadings were the right way.)

Some of what follows might be dependent on the rendering program.

First, I'd like to say that the mechanism outlined in the question is quite ingenious. To understand why I needed to modify it a little, I feel I need to explain what it does (or rather, what it intends to do).

The idea is to take the given path and create a fading from it. The fading can be thought of as an alpha mask which gives the opacity of each pixel. The idea is that this fading should be a filled version of the path (filled at "half transparent") and smoothly go to full transparency at the edge. Doing this smooth variation is a bit of a pain as it involves specifying the colour of a pixel (which relates to the resulting opacity in the mask) depending on its distance from the path. The question uses an ingenious way of doing this by drawing the path at different widths, each with a different opacity. This fading is then used against a filled, black copy of the original path to create the shadow. Due to the varying opacity near the border, the effect is to produce a shadow.

However, the code in the question contains a subtle flaw. The final path is both stroked and filled. Both of these have the fading applied, but the fading is applied to each in turn - not simultaneously. I tried fixing this with a transparency group, but that only uses a blanket opacity, not a fading. 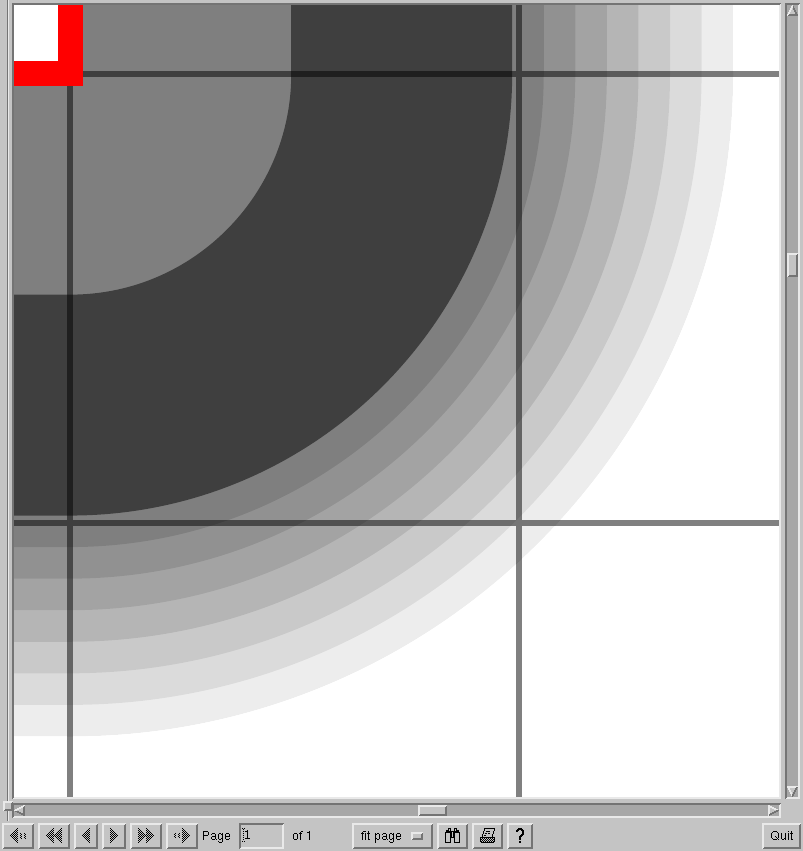 So we must only fill the final path. This means that either we have to either enlarge the path or we must adjust the way that the opacities of the original path fade to the boundary so that they fade out as the path is reached, not as the edge of the stroke is reached (remember that when a path is stroked, the ink goes both sides so that the actual path is in the middle of the painted pixels). Enlargening the path feels like a good idea as a shadow would typically be larger than the original object, but getting the precise effect of fading is more accurate with changing the way the opacity is specified. (To get the larger shadow we enlargen the path right at the start.) The practical upshot of this is that we fill the alpha mask first, then stroke the path with ever more transparent strokes that get thinner and thinner.

Next, we come to the part about making the corners fuzzy. Again, the method used in the question is ingenious: use rounded joins when drawing the path in the fading picture. The drawback of this is that the joins are only rounded on the outside of the bends. The insides are square, and it is the insides that we now see. To get round this, I added the ability to invoke PGFs method of making joins between path segments rounded which involves modifying the path itself rather than just how it is rendered.

With all that in place, we now get a reasonable drop-shadow effect without massively awkward code (at least, it doesn't feel too awkward).

Notice that I don't even need a \makeatletter anymore!

New stuff that this uses:

There's a few more that either get used internally or were things that I thought of using but ultimately didn't.

(Sort of edit: a little while has passed since I wrote the above but I haven't actually posted anything yet.)

I wanted to end with a more spectacular picture. In doing that, I found a couple of bugs in the spath stuff, and made the above a little more customisable with some pgfkeys. There's also clearly a few bugs still to be squashed with the bounding box.

Here's some more code - this won't run on anyone else's machine because the stix-letters and stix-italic-letters aren't proper packages: they're the result of running the STIX fonts through fontforge and a perl script to turn them into SVG paths that TikZ can understand.

Here's what that produces: 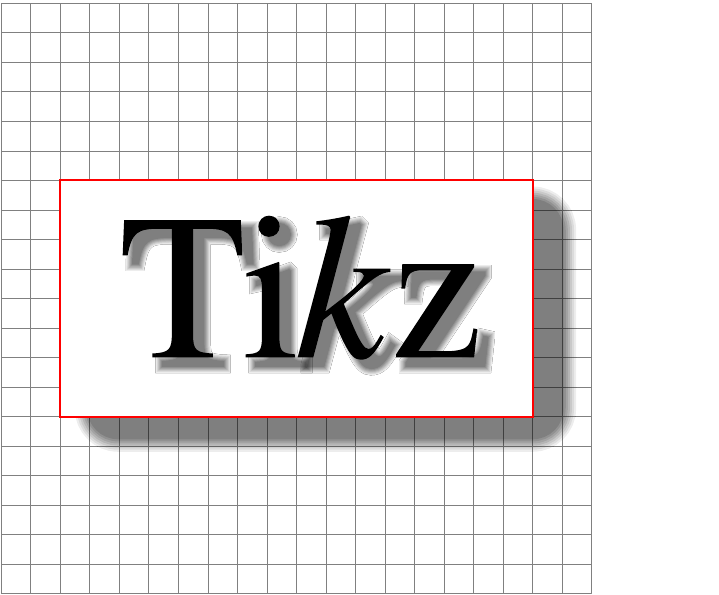