To insert text in mathmode, there are a couple of commands:

and so on. Now, sometimes I would like to have some math entities typeset upright (see for example How to best typeset "special" constants (complex unit i, Euler's number e,…)?).
I understand that \mathrm sets the text in Roman and upright, but in some cases I do not want serifs (e.g., in presentations). The command \mathup does not seem to exist.

What is recommended way to set upright text in math mode?

I guess what you are seeing is the following when you use \mathrm with a serif font:

There are two ways to fix this: one fairly drastic option is to put

but this may feed through to places you are not expecting. An alternative is to replace the two relevant definitions from beamerbasefont.sty by

in your preamble. In the beamer style file {cmss} is {\rmdefault}.

Applied to the above example, either method gives you:

As I understand your question, you would like the \bm command to always typeset its contents in slanted style, whether in ordinary, i.e., serif, math mode or in the sansmath environment. The following modified version of your MWE achieves this objective.

Relative to your code, I've made the following three changes: (a) The sansmath package is now loaded with the T1 option; (b) the \SetMathAlphabet{\mathsfbf}...{bx}{sl} command tells LaTeX to use a slanted font in bold-math mode; (c) the sansmath environment is augmented so that \bm will typeset its argument the way that \mathsfbf does. (I say "augmented" rather than "patched" because I believe that the sansmath package predates the bm package. Hence, the sansmath package couldn't make allowance for the emergence of the subsequent \bm command, right?) 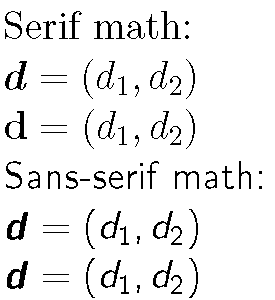 Consistency is the primary goal. So the first task is to know what "special numbers" we need and define commands for them:

(ramuno was how some Italian mathematicians of the 16th century called the quantity that squared gives –1; then Euler started using i).

The mathematical typography tradition usually didn't have a special treatment of these symbols. See, for example, n. 359 in Gauss's Disquisitiones Arithmeticae, where the equivalent of

is found (the edition I consulted is from the Werke by the Königlichen Gesellschaft der Wissenschaften in Göttingen, vol. 1, 1863, page 450). There's no doubt what this i is denoting.

However, in recent times, under the influence of physics and applied mathematics, people started to denote "constants" with upright letters. There's even an ISO regulation about this, which is compulsory in some fields where uniformity among papers and books is very important.

In pure mathematics there's essentially no rule. Do as you like or how your field is used to. Using special names for the special numbers allow you to change the appearance of your document just by changing the definition.

If you feel that there may be confusion between the "imaginary unit" (no worse name could be chosen for it) and an index (for summations, for instance), you have three strategies:

Strategy 2 is used by Graham, Knuth and Patashnik in their "Concrete Mathematics". Strategy 3 is very common in math textbooks.