I am new at algorithm2e and I'm really struggling with the most simple things.

I would like to write an algorithm (pseudocode) with a few functions that call each other. For now, I have this minimal (not)working example:

The output is the following:

As you can see, the first line of code a is on the same line as the function definition. Also, nothing is indented and the whole thing looks rather ugly.

What am I doing wrong?

As the documentation (try texdoc algorithm2e on the command line or search for algorithm2e.pdf) says:

\SetKwFunction{KwFn}{Fn} defines a macro \KwFn{arg} which prints Fn in Function typography and its argument arg in argument typography, surrounded by a pair of parentheses.

EDIT: The following example is in the documentation:

So the idea is that \SetKwProg defines a template for functions (e.g. \Fn or \Def). \Fn and \Def themselves now have two arguments, one for the header and one for the body of the function.

To adapt your example: 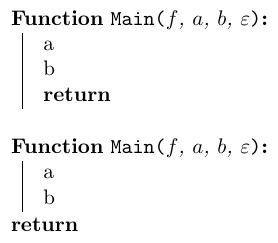 The procedure environment like algorithm is already a float so you cannot place it inside figure or table directly. See this discussion for more details.

You can place your procedures in minipage environment and add caption using captionof command from caption package. and then enclose them in figure environment as follows,

You may also want to look at the answers for this question.

[Tex/LaTex] Adjusting the caption of an algorithm2e code

You can get captions identical to the ones for figure in the following way:

However every caption to algorithm will issue a spurious