It depends on your purpose. If the purpose is the human visual system, then you might possibly get more-appreciated output using imresize() with 'lanczos3'. See http://en.wikipedia.org/wiki/Lanczos_resampling#Limitations

MATLAB: How to use imcrop() on an image without losing resolution

The spatial resolution will be the same, in terms of the details you can resolve in the image. The image matrix will be smaller (fewer pixels) of course.
Axes controls will auto-size, to some extent, when you call imshow(). You can change the 'InitialMagnification' parameter if you want to magnify the image upon display but leave the cropped image intact (the same size).
You can call imresize() if you want to change the number of rows and columns in the cropped image to be something else.
Be aware though that it may shrink it down to fit into axes that you have on the screen.

I'll be editing this answer as I read the code.
---edit: the main reason for your code not working is at the end of the answer. I'm not looking at the rest of the code.
I have only looked at the beginning of the code. Already:
A simpler way to write that is:
which has the added benefit of actually giving you a uniform distribution and combined with the if test does give you 90%-10% probability. Your method doesn't, it's 95%-5% 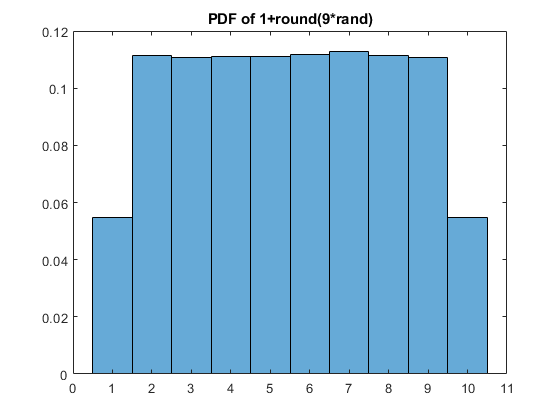 I'll let you work out why it's not uniform at the edges.
--------
You ask for input, and if it's empty ask again. Why if the user again enter nothing. You continue as if all was well. What if the user did enter something but it's invalid.
The best way to cope with both is with a while loop:
-------
Major bug there! a1 and a are matrices, so a1~=a is a logical matrix (4x4) of true and false values (0 and 1). What does while consider true when you pass it a logical matrix?
The condition is only true if all the elements of the matrix is true. Therefore, the while loop will only be entered if all the element of a1 are different from a. If even one element of a1 is the same as the corresponding element of a, then the condition is false, and you skip the while.
You actually meant to enter the while if any element of a1 differs from a, you could have written that as:
or simpler not do an element by element comparison and just ask matlab are the matrices the same with isequal: