How do I compute the fundamental group of the connected sum $X \mathop{\#} X$, where $X$ denotes the real projective plane?

I'd like to use Van Kampen's theorem, but I have trouble visualizing what this space looks like. Could anyone provide hints?

The real projective plane $\mathbb{RP}^2$ can be represented as the following identification bi-gon: 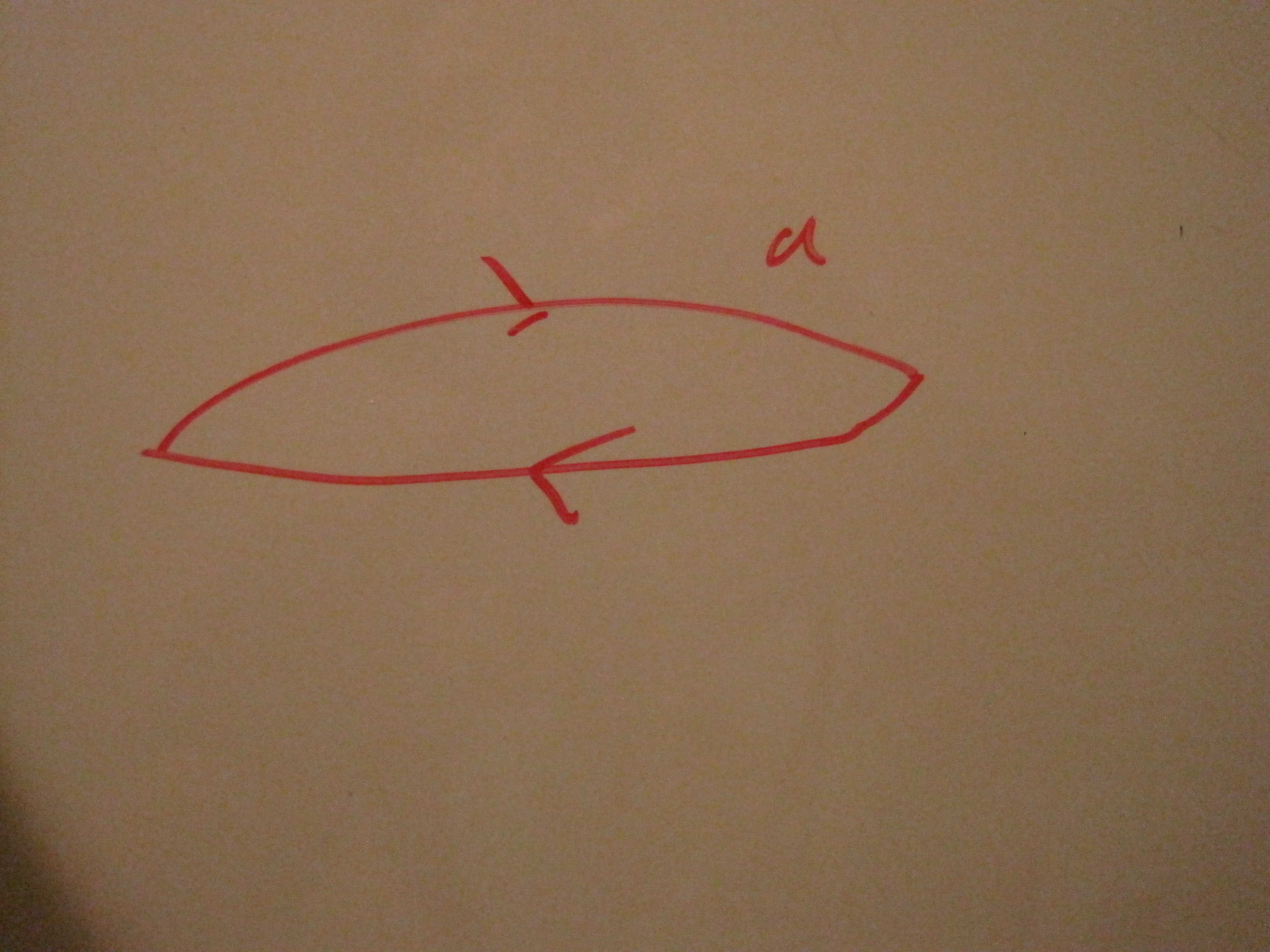 By taking two of these bigons, cutting each at a vertex, and gluing them together again, we obtain the identification polygon for $\mathbb{RP}^2 \# \mathbb{RP}^2$:* 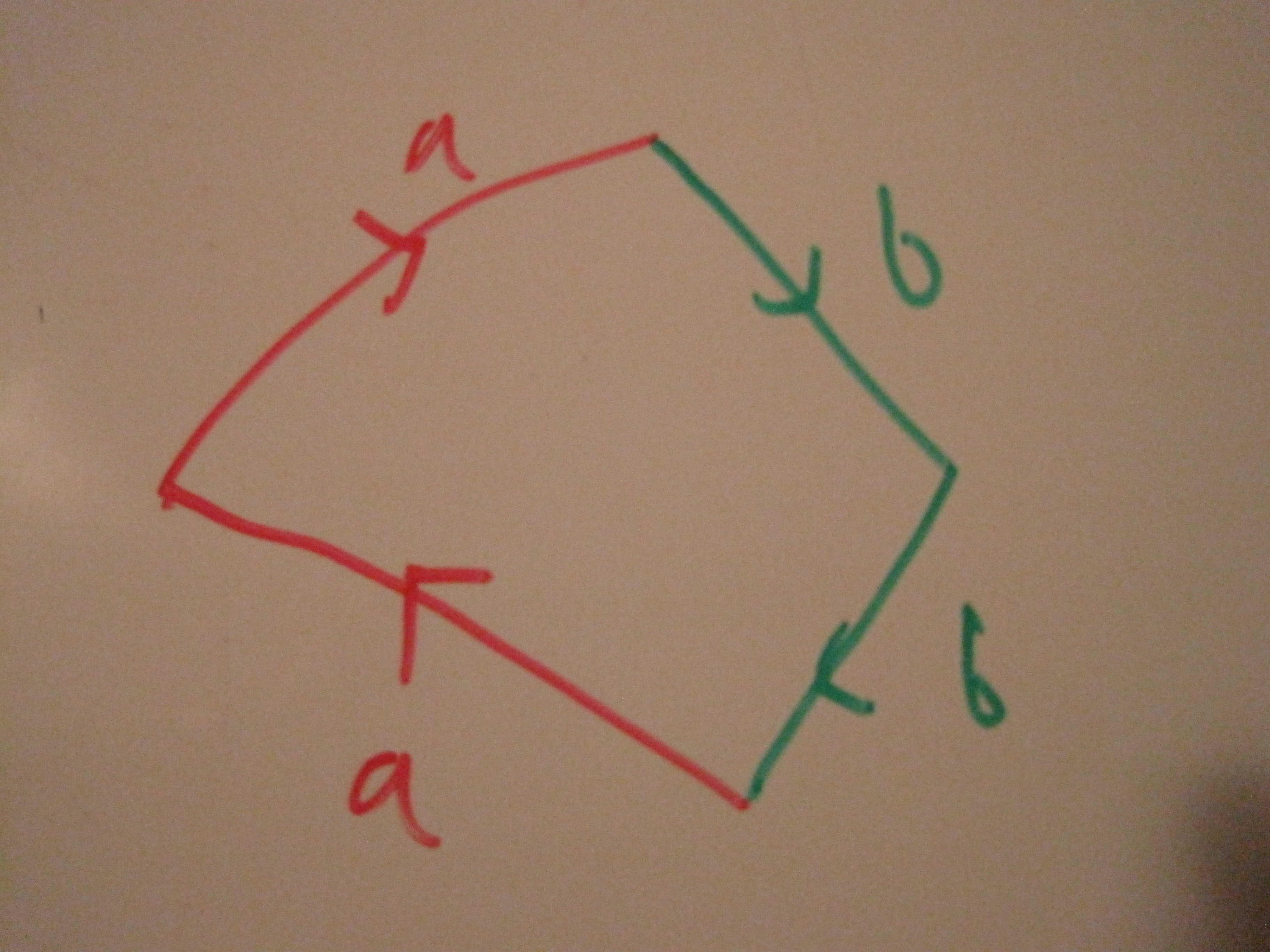 Can you take it from here?

* : Note that $\mathbb{RP}^2 \# \mathbb{RP}^2$ is in fact homeomorphic to the Klein bottle. This can be seen by cutting and regluing the identification polygon.

** : This is a standard trick for finding fundamental groups of compact surfaces. We first realize the surface as an identification polygon, and then apply the Seifert-van Kampen Theorem to the polygon with a point $P$.removed and a small disk around $P$.

[Math] Fundamental group of the sphere with two points identified.

The background to this question is discussed in this mathoverflow discussion. Since two points, say $a,b$, are to be identified, it is as well to start with a model of the whole situation, namely the fundamental groupoid $G=\pi_1(X,C)$ on the set $C$ consisting of the two points $a,b$. Since $X$, presumably the $2$-sphere, is simply connected, $G$ is isomorphic to the groupoid $\mathcal I$ which has two objects $0,1$ and exactly one arrow $\iota:0 \to 1$, as well as $\iota^{-1}: 1 \to 0$, and identities at $0,1$. When you identify $0,1$ of $\mathcal I$ to a single point in the category of groupoids you get the group $\mathbb Z$ of integers.

All this is explained in the book Topology and Groupoids, the third edition of a book published in 1968, i.e. nearly 50 years ago. A translation of some 1984 comments of Grothendieck on the neglect of this use of many base points is given here. See also the account by Philip Higgins in this now downloadable Categories and Groupoids (originallly 1971).

My understanding is that algebraic topology deals with algebraic modelling of geometric situations, and groupoids, which may have many objects, allow the modelling of the identification of several base points. If you are tethered to only one base point, then things are not so clear, and students may get confused.

May 27: Just to add some information. The key point is that is that the category $Gpd$ has a forgetful functor $Ob: Gpd \to Sets$ which is a "cofibration" of categories, meaning that if $G$ is a groupoid and $f: Ob(G) \to Y$ is a function then there is a groupoid $f_*(G)$ and morphism $U_f: G \to f_*(G)$ with a universal property that can be expressed in a pushout diagram of groupoids $$\begin{matrix} Ob(G) & \to & Y\\ \downarrow & & \downarrow\\ G & \to & f_*(G) \end{matrix} $$ The construction of $f_*(G)$ was introduced by Philip Higgins and includes that of free groups and free products of groups.

The relevance of this to the generalised van Kampen Theorem is given in Section 9.1 of Topology and Groupoids.