I've just learnt about Seifert matrices and thought it might be a good idea to compute some. Can you tell me if this is right: 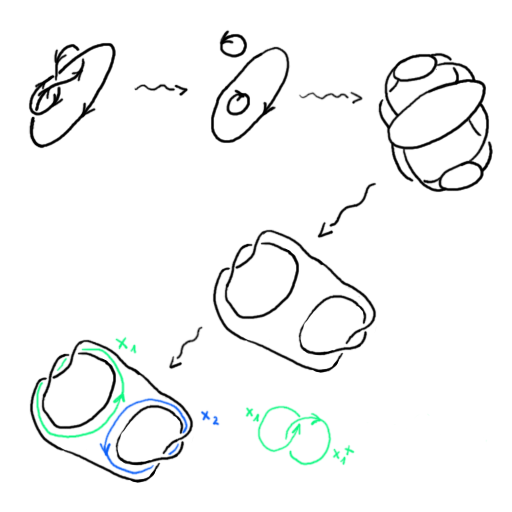 But since a knot can have many Seifert surfaces there can be many different Seifert matrices so this doesn't tell me much.

Question 1: In general, how can I check that my Seifert matrix is correct?

Question 3: In the picture above I'm particularly unsure about picture 3. How do I know that I attached the bands correctly?

Thanks for your help.

Here is a partial answer, I can only help you with question 3, so here goes:

Basically, you messed up when you attached the bands. If you want to reduce the probability of ballsing up when constructing the Seifert surface I suggest that you try to make it look as close as possible to the original knot diagram. In the example of the figure 8 knot, this would mean that you should draw something like this:

Sorry to send you on a wild goose-chase! (Or is it a wild-goose chase?) Anyways, I learned about the Arf invariant because of the Kervaire Invariant One problem (which I'll describe briefly below), and so I assumed (wrongly, obviously) that this was also the reason you had come across it too.

As for your Question 1, @student is correct that a Lie group is always frameable -- you can choose any basis of its Lie algebra, and then transport it via (say) left-multiplication to the entire manifold (i.e., extend to a left-invariant framing). There are of course framed manifolds that can't be made into Lie groups, but this is definitely the easiest class of examples. In fact, the cobordism ring of (stably) framed manifolds is precisely the ring of stable homotopy groups of spheres! This is easy to prove via something called the "Pontrjagin-Thom construction", but this ring is, on the whole, extremely mysterious. However, much about it is known; some people like to say that our understanding of $\pi_*^S$ is a yardstick for our progress in algebraic topology.

As for your Question 2, an extension of a knot to an embedded torus is just a closed tubular neighborhood of the submanifold $S^1$ sitting inside $S^3$. And you're right that for the purposes of knot theory, you can often just think of this as $\mathbb{R}^3$; knot theorists like to compactify the ambient space for various reasons (e.g. so that they can talk about the "hyperbolic volume" of the knot's complement, which believe it or not is an invariant of the knot (i.e. it's invariant under isotopy)), but certainly any knot will miss some point, which you can take to be the point at infinity (so that your knot sits in $\mathbb{R}^3 \subset S^3 = \mathbb{R}^3 \cup \{\infty\}$).

As for your Question 3, a knot or link is a different collection of data from a manifold, but that data involves manifolds. People like to be very careful about what structure they take to be part of the data they care about, so for instance a manifold might be defined as a topological space which admits local charts such that etc etc etc; that is, they don't take the local charts as part of the data.

Now, the Kervaire Invariant One problem asks: Which framed manifolds have nontrivial Kervaire invariant? As I've indicated above, this is secretly a question about stable homotopy groups of spheres. This problem is around half a century old, and people chipped away at it bit by bit, but for the most part it withstood anything remotely resembling a complete resolution. You can read the blow-by-blow yourself at the wikipedia article, but the most striking result known up through 2009 was that it could only be nonzero in dimensions of the form $2^k-2$ (due to Browder in the '60s).

But then in 2009, Hill, Hopkins, and Ravenel (the "HHR" I referred to in my comment on your other question) stunned the algebro-topological world with a proof that the Kervaire invariant vanishes above dimension 126. Since there are known examples in dimensions 2, 6, 14, 30, and 62, this leaves only the case of dimension 126 still open. Nutty, right?

The trick is to remember that the entire knot is going to be pushed off to the vertex of the complex. The $1$-skeleton of the gluing is actually those two little "connecting" lines where the knot twists against itself. The $2$-skeleton will be gluing triangles in an "obvious" way, but the edges of the triangles will be glued to those little connecting lines, not to the knot.

Here's a picture I drew: 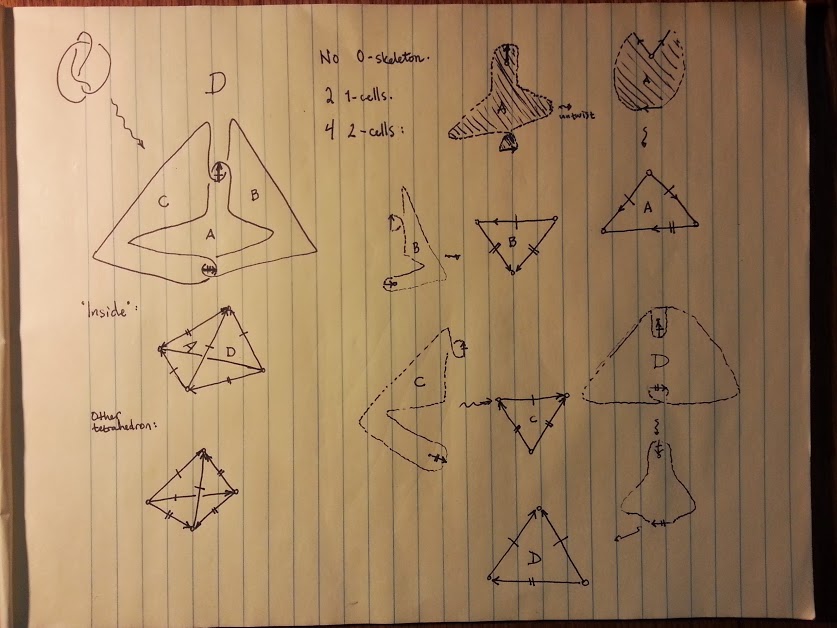 (Disclaimer: I ran out of time so I'm not completely sure that what I labeled "inside" is actually the inside of the tetrahedron.)

Also, if you want to work backwards, the explicit face-pairing is given in the online notes in ch. 1 and ch. 4. I don't remember if it's given in the book version.