[Math] Probability 2 player card game with multiple patterns to win, who has the advantage

My simulation program works by first shuffling the entire $52$ card deck and then searching the entire deck for candidate wins for each player, then simply selecting the candidate win with the lowest drawn card position. Normally there is only $1$ candidate win per winning hand as can be seen by only $769$ candidate ties. A candidate tie is when the program detects a possible win for both players, which are normally at different final drawn card positions, but very rarely will be the same. In $22$ cases they were the same, thus resulting in a tie. It was easier for me to let the program search the entire $52$ card deck then to just draw $1$ card at a time looking for winners after each card (after the $6$th card is drawn which is the minimum # of cards needed for a player D win).

I have some results from a simulation program. Also it is interesting that since the game is so close to $50/50$, as the simulation runs, the partial results show C sometimes winning. This is why $1$ million hands is not enough.

I am hoping someone else can do some analysis too to help confirm these numbers. Perhaps some mathematical calculations to help show that player D has a slight advantage. Also if someone would like some other stats tracked in the simulation program just let me know in the comment section and I can try to put it in and then post those results.

Here are the patterns we need to check for a possible C win. Note each length $3$ straight can appear in any order so for example, $234678TJQ$ and $678234TJQ$ are equally good winners for player C. Those are just $2$ of the $6$ possible permutations of each of these $10$ main patterns. So there are $ 60$ actual patterns including permutations. The comma indicates any number of cards (including $0$ cards) may appear as long as the pattern continues. For example, in pattern $1$, if the drawn cards are $K234J7ATJQ2495678$, that is a winner for player C cuz it follows (a permutation of) a winning pattern.

The winning patterns for D are (no permutations are allowed):

Note that for player D, NO permutations of these $19$ patterns are allowed. They must appear EXACTLY as shown here. For example, $QQJJKK$ is NOT a win for player D. This is a clarification not a rule change.

It is somewhat amazing to me that wins are rare for both C and D (based on the average number of hands between wins), but they are almost equally as rare, making it almost $50/50~$ like a fair coin toss.

In case anyone is interested, I had the program display the cards for all $22$ ties. It displays the entire deck in the shuffled order for that hand so you can just trace where the tie occurred. For example, in the first tie, the relevant cards are $,345,89T,9TJQKA$. Here is a cropped partial screenshot for the simulation output for the ties: (T= ten). 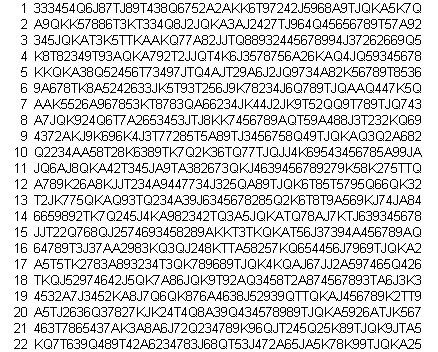 I will now attempt to solve this mathematically but in a very simple way.

So I have done some of the work for you. I just need someone to somehow compute the interactions and account for those in the final probability. I will attempt to calculate C's win probability, also using simple math if possible.

Now let's look at C's win pattern. Let's take $234,678,TJQ$ as an example. Any one of those $3$ card patterns can appear first. Let's suppose the $234$ appeared first. The first part of this pattern MUST appear by card draw $46$ to allow ample time for the other part of the pattern to appear. To get $234$ on the first $3$ card draw we have probability $4/52 * 4/51 * 4/50$ = $1/2072$. From here it gets more complicated. Placing the three $3$ card straights might be one of those stars and bars type problems. Just find the probability of getting the $234,678,TJQ$ in order (without completing a $6$ card straight) and then multiply by $6$ to account for the possible permutations of them. Then multiply by $10$ to account for the $9$ other similar win patterns for C. This should be a rough approximation. Treat the $234$ as one entity and just place it anywhere in the $52$ card deck and do the same for the $678$ and $TJQ$. That is stars and bars. I think one way to solve this is to use stars and bars with a gap space of at least $2$ (such as $2,3,4,i,j,6,7,8$ so we are guaranteed not to have a $6$ card straight, then handle the cases where the gap space is $1$ separately so that we can make sure we only place cards there that will not complete the $6$ card straight. Also if anyone needs a certain count of some pattern that will help them to use math to solve this just let me know and I can try to create a bucket for it in my sim prog. I would love to get an exact answer to this problem but based on the lack and answers here (even with a $150$ bounty), I am assuming it is not easy.

[Math] probability – vehicle arriving and gap in between them