I'm modelling a university applicants dataset using PROC LOGISTIC in SAS (9.2). The target variable is 'Enrolled y/n', and i'm modelling against a range of 13 variables (a mixture of indicator, continuous and class) including: Number of applications submitted, number of events attended, Applicant Age, etc.

I'm using 50% of the whole dataset to train the model, which gives me a sample size (for training) of just under 15,000 observations.

When I run PROC LOGISTIC, the output is reporting that the majority of the variables are highly significant at <.0001.

The 'Testing Global Null Hypothesis: BETA=0' statistics also report that the model is good at <.0001, and the Association Statistics table is reporting that a high percentage (90%+) of predicted probabilities are concordant.

All of which seems great, until I get to the deviance statistics for Goodness of Fit. Pearson, Deviance, and Hossmer/Lemeshow tests all also report a Pr>ChiSq value of <.0001. If i'm interpreting this correctly (referencing Paul Allison), this significance level means that the model should be rejected on the grounds of poor fit.

I've tried using STEPWISE to reduce the model, but this only resulted in rejection of a single factor, and the GOF stats were unaffected.

Is there something fundamentally wrong with my model – or am I misinterpreting the GOF tests under the circumstances? Please can anyone advise what I need to investigate?

The Code I've been running for just a single effect but which is producing the same problematic results as for the model including all the factors: 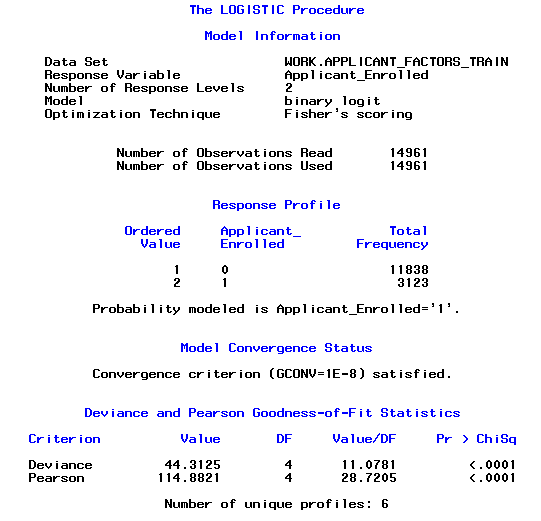 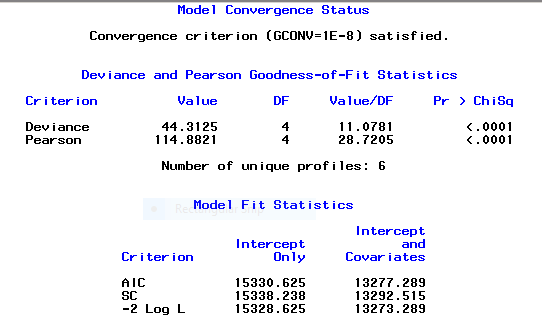 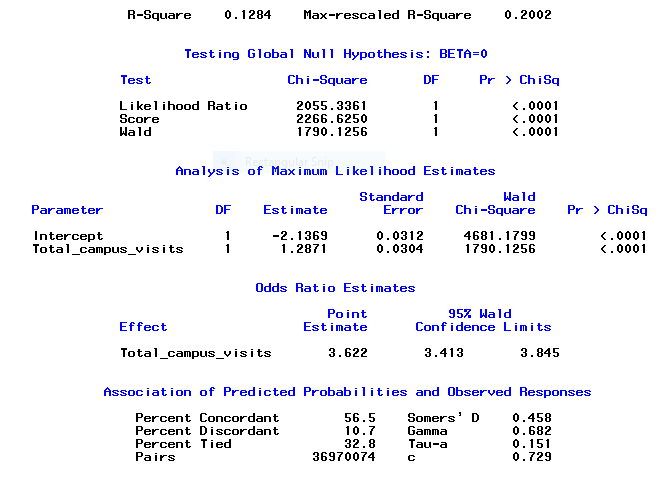 I've since read that Goodness of Fit tests become inherently problematic when dealing with large datasets, and consequently, based on the literature, have chosen to disregard them in favour of a cross validation approach that considers p-value, test of null hypothesis, ROC AUC c statistics, confidence intervals and Max-rescaled R-Square statistic (Johnson and Wichern 1992) (Shmueli, Lin and Lucas Jr. 2013) (Li 2013)

There are many thousands of tests one can apply to inspect a logistic regression model, and much of this depends on whether one's goal is prediction, classification, variable selection, inference, causal modeling, etc. The Hosmer-Lemeshow test, for instance, assesses model calibration and whether predicted values tend to match the predicted frequency when split by risk deciles. Although, the choice of 10 is arbitrary, the test has asymptotic results and can be easily modified. The HL test, as well as AUC, have (in my opinion) very uninteresting results when calculated on the same data that was used to estimate the logistic regression model. It's a wonder programs like SAS and SPSS made the frequent reporting of statistics for wildly different analyses the de facto way of presenting logistic regression results. Tests of predictive accuracy (e.g. HL and AUC) are better employed with independent data sets, or (even better) data collected over different periods in time to assess a model's predictive ability.

Another point to make is that prediction and inference are very different things. There is no objective way to evaluate prediction, an AUC of 0.65 is very good for predicting very rare and complex events like 1 year breast cancer risk. Similarly, inference can be accused of being arbitrary because the traditional false positive rate of 0.05 is just commonly thrown around.

If I were you, your problem description seemed to be interested in modeling the effects of the manager reported "obstacles" in investing, so focus on presenting the model adjusted associations. Present the point estimates and 95% confidence intervals for the model odds ratios and be prepared to discuss their meaning, interpretation, and validity with others. A forest plot is an effective graphical tool. You must show the frequency of these obstacles in the data, as well, and present their mediation by other adjustment variables to demonstrate whether the possibility of confounding was small or large in unadjusted results. I would go further still and explore factors like the Cronbach's alpha for consistency among manager reported obstacles to determine if managers tended to report similar problems, or, whether groups of people tended to identify specific problems.

I think you're a bit too focused on the numbers and not the question at hand. 90% of a good statistics presentation takes place before model results are ever presented.

That's the likelihood ratio goodness-of-fit test for contingency tables. The saturated model has a parameter for every cell ("combination of regressor values") so it fits the data as well as possible, & you're testing to see if that's significantly better than your model. But you need a few counts in each cell for the test statistic (the deviance) to have roughly a chi-square distribution, so that ought to be mentioned somewhere—the approximation's not going to be much use when you have a continuous regressor.