My experimental setup is the following:

If we repeat this test for many instances $I_j$, we get a distribution of p-values.
I would like to determine if we can reject the null hypothesis over all tests.

I've looked at Fisher's method, but I have some pvalues that are so small, that the result is 0.

If I make a histogram of the pvalues I get the following: 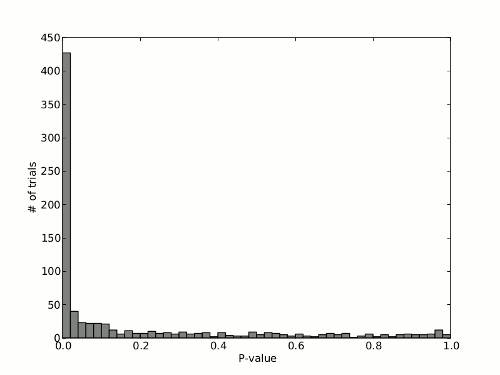 There is a clear bias towards very small p-values, but what worries me is the uniform looking distribution of the other p-values.
Does our data reject the null hypothesis?

EDIT:
What if the left-most bar indicated less tests with such small pvalues. How would we evaluate the following distribution of p-values? 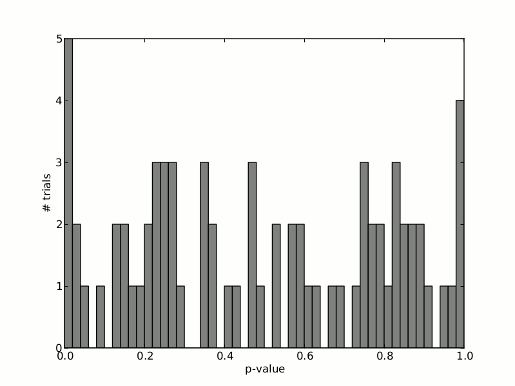 If the null hypothesis is true then the p-values of a test should follow a continuous standard uniform distribution.

Your graph shows clearly that the distribution of p-values is not uniformly distributed, which would lead me to reject the null hypothesis. The fact that there are some replications where the p-value is very large fits within the logic of statistical testing: a small p-value does not give you absolute certainty that the null hypothesis is false, it just tells you that it is unlikely, but not impossible, that the data you have seen would occure if the null hypothesis were true.

As an asside, you can use this feature to check whether a test performs as it should. For example, many tests are based on an asymptotic argument and you may wonder if your data has enough observations for that argument to kick in. In that case you can simulate data such that you know that the null hypothesis is true but is otherwise similar to your data (same number of observations, independent variables with the same joint distribution, etc), and than look at the distribution of p-values. If you see a deviation from the uniform distribution, then that is an indication that the test is not quite working for your data. Here is an example: https://stats.stackexchange.com/questions/59091#59091

Irrespective of the discussion in the comments about how these $p$-values of $0$ arose there are methods for combining $p$-values which can be calculated if $p=0$.

As the OP indicated neither Fisher's method nor Stouffer's works.

The method of Edgington based on the sum of $p$, the closely related mean $p$ method, the method using logit of $p$, Tippett's method based on the minimum $p$ and variants of Wilkinson's method of which Tippett is a special case can all be calculated. Whether that is a sensible thing to do depends on the scientific question of course.

All the methods mentioned are available in the R package metap which, disclaimer, I wrote and maintain.

Your formula for the p-values appears correct, assuming p1 is the t-value.

Corrections for multiple p-values can be handled in R with the p.adjust function.

The following code in R calculates the p-value for 7 genes, then uses either BH or Bonferroni correction. The S columns in the data frame indicate whether the p-value is < 0.05.